On December 17, 2002, Dr. Ralph Winter wrote a short article which he entitled “The Instrumentalities of God,” in which he explores the concept of credit for things that happen in life going always to God when it should actually go to human and angelic beings who are acting on His behalf. He says that the Holy Spirit enables persons to do things we ordinarily would not do on our own not because God needs us but because He has called us and “apparently has chosen to create finite beings who can think, choose, learn, uphold or betray His goals.” What amazes Winter is the fact that these free will agents all live on one planet orbiting the sun that is a tiny spectacle in the vast Milky Way galaxy.

Dr. Winter observes that people often attribute to a dictator in a suffering country all of the horrible occurrences that victimize so many when in reality the leader is not always personally involved but employs others to carry out his plans for him. On rare occasions, a dictator will do something publicly himself to make a point, but his will being in operation does not usually mean he is to be credited personally for whatever happens to damage lives. The same applies to the President of the United States. Many times he is given the credit for actions that his Secretary of State, for example, actually takes.

Dr. Winter asks, “Does God work this way? When an Evangelical is elected to high office we may say ‘God put an Evangelical in the White House,’…even though in fact the Holy Spirit may have moved the hearts of thousands of voters to elect that person.” Winter believes that angels as God’s messengers may do far more than only deliver messages, yet their activities are attributed to God. How about the acts of Satan? Even his doings might be attributed to God, which concerns Winter. Toward the end of his article, he writes “The reason I am pursuing this…is because I am concerned that we not expect God to do things which either angels or men are supposed to do. It would be tragic if we are confused about what He will get done through His unseen instrumentalities and what He expects human beings to do.” 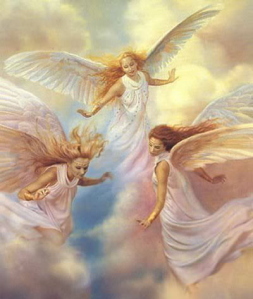