A woman in Nairobi, Kenya wrote a letter to Dr. Ralph Winter on October 20, 1984.  She says she met him at the headquarters of the Navigators in Colorado Springs a few years before.  “I was the woman whom you tried to recruit to fly to Burma immediately to get your handful-of-rice story.”  Dr. Winter told her about his idea of a National Geographic magazine about unreached peoples.  Her idea was to have a regular section on unreached peoples in a Christian TIME magazine.  She has written a paper about this idea and is sending a copy to Dr. Winter for his perusal.

The writer hopes he will read her paper and put her thoughts into his think tank in Pasadena, CA.  She has prayed for her idea for 10 years but cannot implement it herself, so she wonders if Dr. Winter has personnel or means to make it a reality.  She comments, “I also produced a multi-media slide show (two slide projectors and a dissolve unit making the slides from one projector dissolve into the fading slides of the other projector) about the Navigator work in Kenya.”  She dreams of a similar project about various unreached people groups that can be shown in their geographical contexts.

Dr. Winter replies to this woman and after thanking her for the mail she sent mentions that a magazine entitled “World Christian” that is produced on his campus may be an example of her idea already.  He encloses a copy of the magazine for her to read and evaluate for herself.  He closes by inviting her to correspond further with him on her idea. 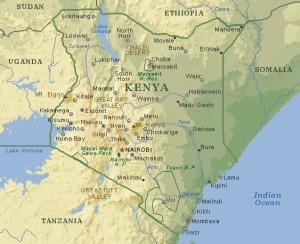